Jim has some time off this spring between ending one job and beginning another and we’ve lined up some Cruzbike adventures.

The first of these was to race The Texas RAAM Challenge 200 in Castroville Texas. Castroville is just outside of San Antonio in the region known as the Hill Country. The spring is a beautiful time to be in there. The weather is balmy and the hillsides are covered with colorful carpets of spring wildflowers. Jim and I decided to get to the area a couple of days early. Jim and I lived in San Antonio for a short time many years ago and have some romantic memories of time we spent there. We enjoyed a relaxing day Thursday strolling along the Riverwalk in downtown San Antonio and catching a movie. In retrospect, it was a good idea because the race was much tougher than either of us anticipated. 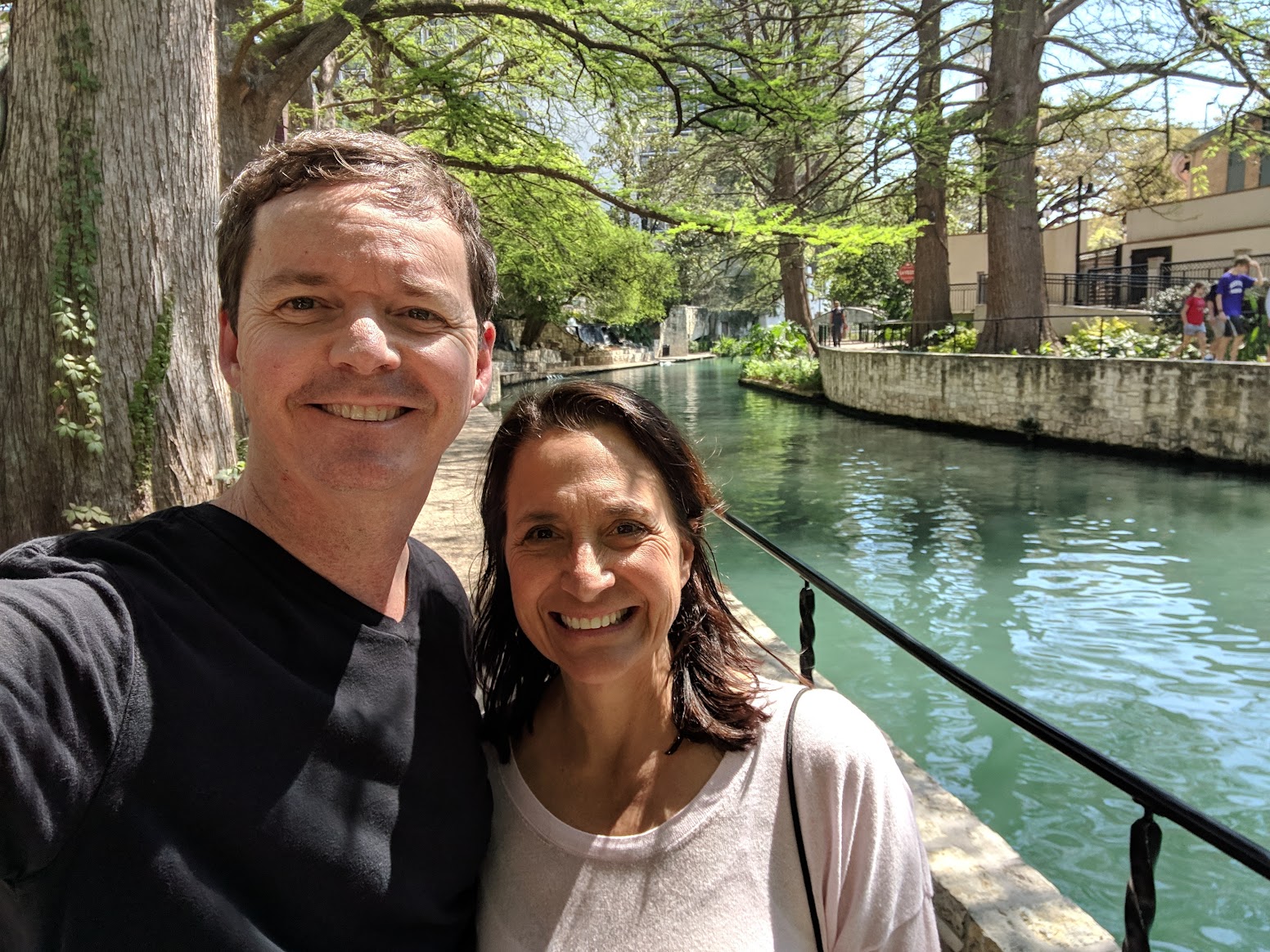 We drove the 35 minutes from San Antonio to the host hotel in Castroville on Friday and got our bikes assembled well ahead of schedule. We used a bike shipping service to transport our V20s. I’ll share more about how we packed them in another post. Larry Oslund, our Cruzbike teammate, met us for dinner. Larry had driven the complete 214 mile course in his rental car that day and our dinner conversation was the first inkling we had that the course was going to be tough. Jim and I had both focused on the RAAM Texas challenge website description:

The Texas Challenge features the best of the famed Texas Hill Country. It’s springtime in the Hill Country and the flowers – BlueBonnets and Indian PaintBrush - will be blooming. Temps are generally 50-80 F. Mornings can be foggy with clearing by afternoon...You'll experience some of the best cycling in the USA.

We’d imagined a long, but delightful romp through beautiful, flower covered rolling hills. Larry sang a different tune. He warned us that the roads were very, very rough, that there were steep climbs and that the course even took us through some flooded areas. Larry was worried enough about the course that he had talked to the race director about changing some of the route to keep away from flooded roads (which they did).

It was too late to turn back, so after a decent night of sleep (who sleeps well before a race?) we got up early and rode the easy down-hill mile to the starting area on the main square in Castroville. It was good to see our RAAM friends at the starting line and I met 6 other women competing in the 214 mile event. It’s encouraging to see more women in ultracycling. We chatted and one of the more local riders gave me an overview of the course. 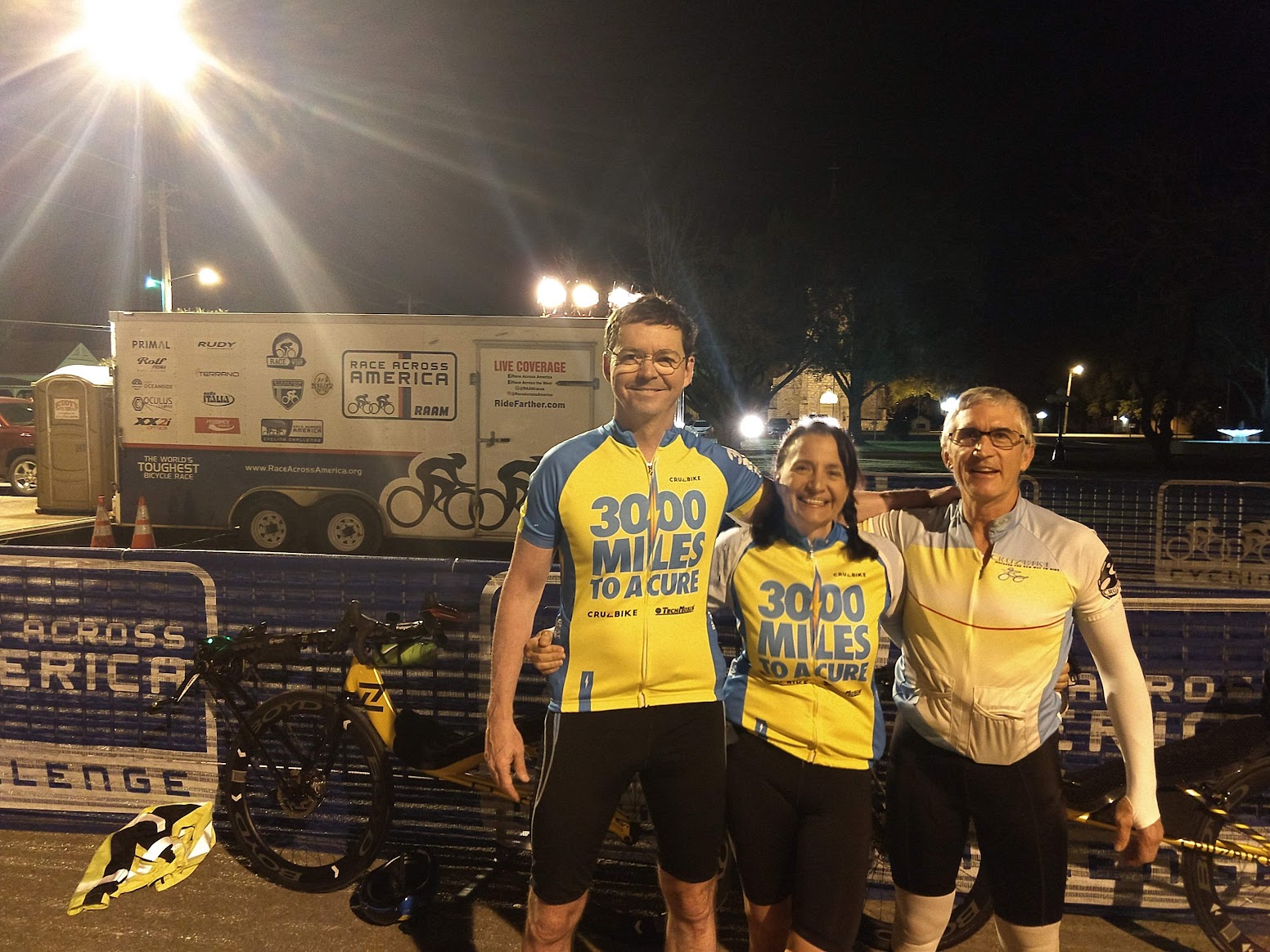 The race began in the dark and the first main road was just as bumpy as Larry promised. Our lights were adequate to navigate the bumpy roads, but not to race them. Fortunately, the lead group was going the same careful pace. We rode with that group of about 15 riders until the first aid station at 61 miles. After a quick stop, Larry, Jim and I took off ahead of the larger group, though they soon caught us. One of the traditional bike riders commented to Jim, Larry and I, that we would love the first 80 miles - but to expect trouble after that. I assumed he meant that the real climbing started then. It was a fair and accurate warning. There was some serious climbing between mile 83 and 105. Some of the climbs were quite steep and the group broke up with some of the stronger traditional cyclists going ahead. Normally we would use the descents to eat up miles quickly, but the roads were so bumpy, I felt nervous to let the bike go. In my fear, I sat up a lot, losing my aero advantage so I could try to navigate around the bigger holes and bumps. The roads in Texas made me appreciate the relatively buttery smooth roads in North Carolina.

During the climbing section between the first and second aid stations, Larry Oslund went ahead and Jim and I also became separated from one another. It was drizzling and we later learned that we each had to walk our bikes up a portion of those wet steep roads. I got into the second rest stop at about mile 118 ahead of Jim and greeted Larry who was waiting for Jim and I. I told Larry to go on and when Jim arrived 10 minutes later I rushed him out of the rest stop. Shortly after we got going again, Jim told me to just go on ahead. He needed time to get himself situated.

I was feeling strong, so I did continue riding hard. The day remained grey and cool, which I was grateful for. I never put on my sunglasses. However, the road quality on the smaller ranch roads the course took us on was horrendous. When the course moved to more major roads, the traffic was fast and frightening and the shoulder was covered with debris. I had to choose constantly between risking a flat tire or putting myself in danger of fast moving automobile traffic. After Jim took the time he needed to organize his food and lights, he rode hard and never got far behind me. The third and last aid station was at mile 161 and Jim saw me leaving as he was coming in.

Later I learned that with only 30 miles to go at about mile 184, Jim was forced onto the shoulder and hit something that cut his tubeless tire. The sealant sprayed out and then seemed to seal the gash, but in the next couple of minutes it slowly went completely flat. I was carrying the spare tubes, and I was out of reach, so despite feeling strong, Jim had to DNF. I was extremely impressed with Jim’s performance. He had little time to train and his knee had been sore, so he came into the race, rested, but without as much preparation as I had. He might have passed me again if he had not had to leave the race.

Oblivious to Jim’s troubles I was riding mostly on my own. I made a couple of wrong turns, but nothing that took me too far off course. I’d been told that there were some serious climbs between 175 and 185, but I found that after mile 161, all the riding was tough with steep and harsh climbs followed by slow bumpy descents or scary roads with the choice between the shoulder and traffic. At around mile 175, there was a killer climb called Tapatia which became another opportunity for me to push my bike. RAAM director Fred Boethling was there to witness it and encourage me. He assured me I was not alone.

When I thought the worst was behind me, the course went for what seemed like hours on a quiet, but horrible road called Bump Gate Road. It was an up and down torture chamber of holes and bumps. I don’t know if Texas ever re-paves their roads, but if anyone from the Texas DOT is reading this ....this one needs it badly. Finally, when I was beginning to wonder if I would make it in before dark, I started to see signs for Castroville. The last 8 miles were on a smooth flat shoulder but I was sick and tired of the race and anxious to be finished. I found myself glancing down at my Garmin so frequently that only 10 seconds would have gone by. I switched to counting pedal strokes and then telephone poles. Those miles were some of the longest.

Finally the finish! Riding across the finish line at 12 hours and 41 minutes, I was cheered by Larry Oslund who finished in an amazing 11 hours and 53 minutes, Jim who’d sagged in with the RAAM crew and a couple of weary looking riders who had finished ahead of me. Larry was third overall*, a strong performance. He always makes us look good. 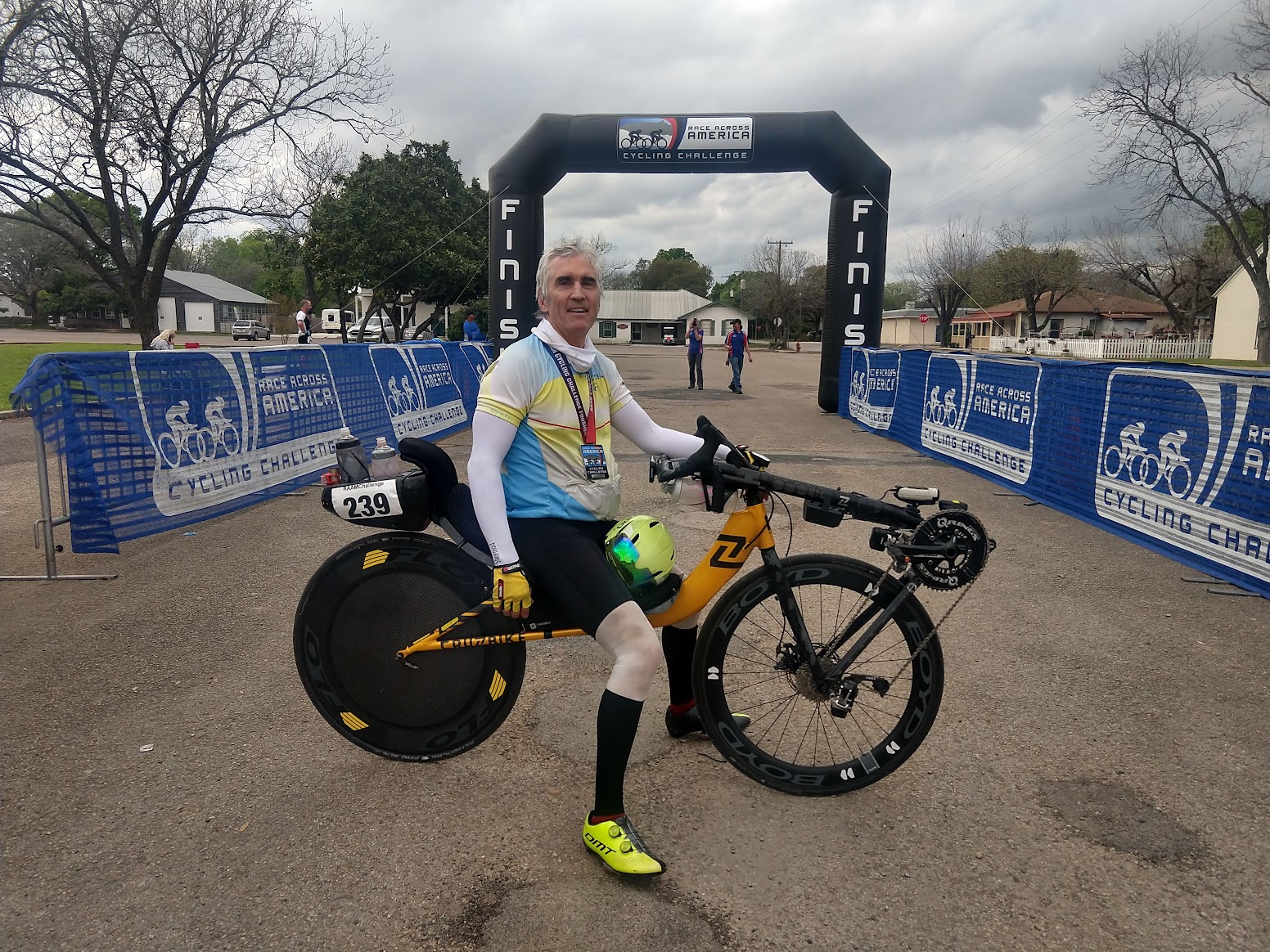 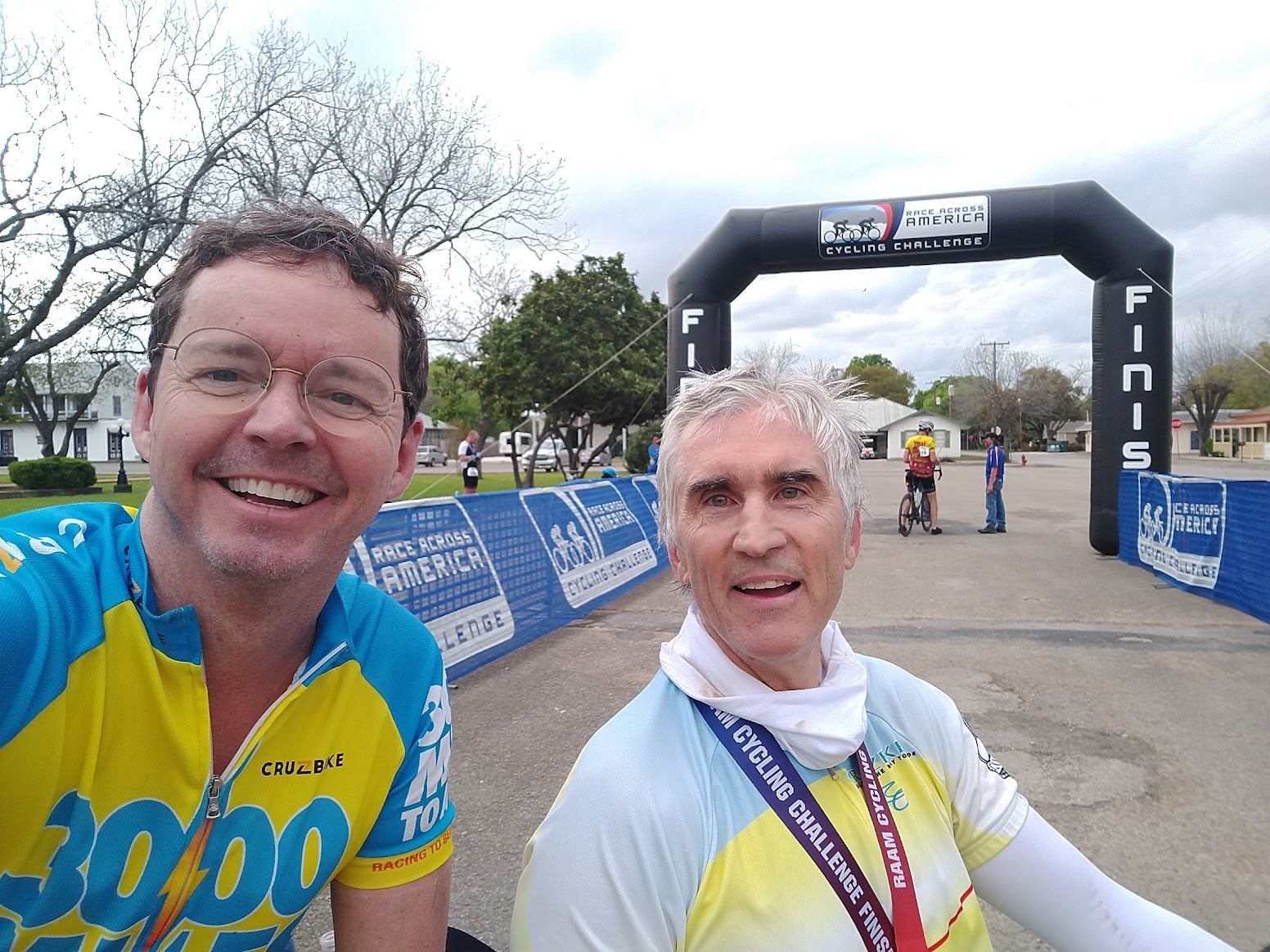 I was fourth overall* of the 35 riders who started and the first woman to finish. Just two minutes behind me was Jenny Park, the experienced local rider I’d chatted with at the beginning of the race. 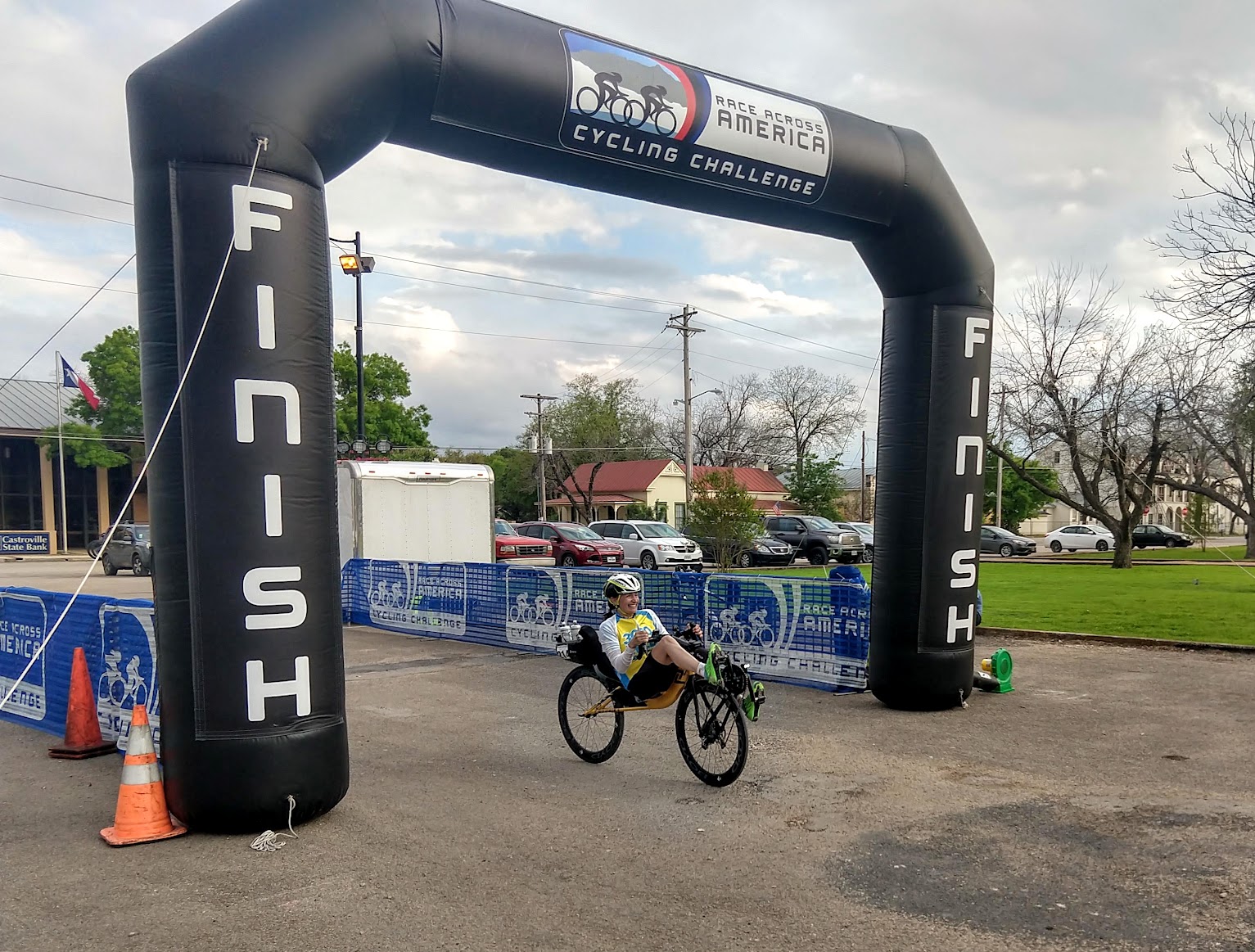 Despite the difficulties of the race, I’m proud and delighted that once again, we’ve demonstrated that the Cruzbike V20 recumbent racing bike can compete and win even in tough events with lots of climbing.

Perhaps the greatest testament to that is that one of the two traditional cyclists who finished ahead of me, looked over at my bike and said “I’d like to try that.”

*Editor's note: At the time of publishing, results had not been made official. These are based on the results reported on the live tracker for the race here: http://trackleaders.com/txraam19